The Truth Behind Pre-Genetic Screening 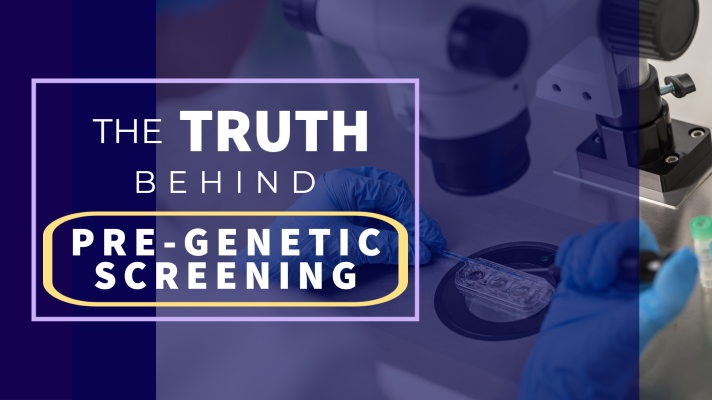 A common concern that arises when considering embryo adoption is the likelihood of the embryos implanting and resulting in a healthy pregnancy and birth. Often, couples want a guarantee that it will work out for them. For many, this means having the embryos pre-genetically screened or tested. However, many specialists have concerns about the accuracy of these tests and the risks this type of testing may impose on the developing embryos.

Pre-genetic screening or testing is usually offered to women over 37, or women with a history of miscarriages and failed IVF cycles. However, the Human Fertilization & Embryology Authority states that there is little evidence showing it improves the chances of conceiving and giving birth to a baby. Because of this, it is often considered an optional treatment add-on.

How does PGS work?

You may be asking, what is the reason for the lack of success? Many speculate it is due to the fact that pre-genetic screening involves removing a single cell or small number of cells from the embryo. This biopsy to remove cells can cause damage to the embryo and prevent it from developing after the frozen embryo transfer.

The Human Fertilization & Embryology Authority also mentions the possibility of misdiagnosis or inaccurate diagnosis through pre-genetic screening. When cells are removed from the embryo, they are being removed from the outer part which eventually becomes the placenta. These cells are likely cells the embryo has already rejected from becoming part of the baby inside. When testing is performed on these rejected cells, there is a high chance that the tests will show abnormal results regardless of how healthy the cells becoming the baby are.

Additionally, when only one or two cells are biopsied, it is reasonable to believe that the rest of the cells might be completely healthy and normal! Taking such a small sample size, similar to any research study, usually negatively impacts the accuracy of the results.

Although it can be anxiety-inducing to be without certainty, evidence still shows that pre-genetic screening does not benefit expectant parents, and is certainly not a guaranteed way to prevent miscarriage.

To learn more about embryo donation and adoption, visit EmbryoAdoption.org.