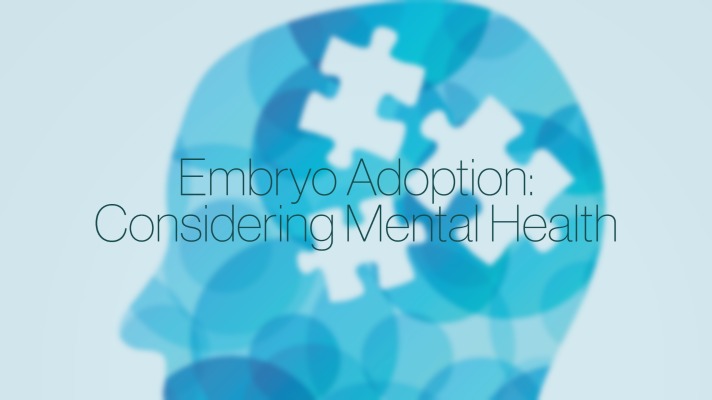 So you have found an embryo adoption program! You have applied, you have done the paperwork, and you might have even spent hours creating the perfect family profile. If your agency of choice operates using a mutual matching system, then you are probably thinking hard about what you might want in a placing family.

Studies show that 1 in 5 adults in the U.S. have experienced a mental illness at some point in their lives. It is important to recognize that your own family likely also has mental health conditions somewhere in the family tree. Your donor family will be no different. This does not mean that the embryos will develop the same condition as adults, nor does it mean that it will be unmanageable if they do. Most mental health conditions are easily managed through medication and therapy, or even simple lifestyle changes.

As a helpful guide, below is a list of conditions you may be concerned about, and some facts to help you figure out how open you are willing to be.

Whatever your feelings may be right now, remember: Embryos that have one of these three conditions in their family background are not worth any less than embryos that do not.

Each of these precious lives deserves a chance to grow up, be loved by a family, and become who they were created to be. Yes, there is a miniscule chance they may develop one of these conditions if it is found in their family history, or even if it is not, but so much more goes into a child’s development than genetics. The home they are raised in and the experiences they have are often the strongest influence on their mental health. Even if they do need some extra support, mental health conditions that may at first sound intimidating have proven again and again to be easily and effectively managed.

For more information on embryo adoption and donation, visit EmbryoAdoption.org.