Embryo Grading: What is it and How it Applies to Embryo Adoption 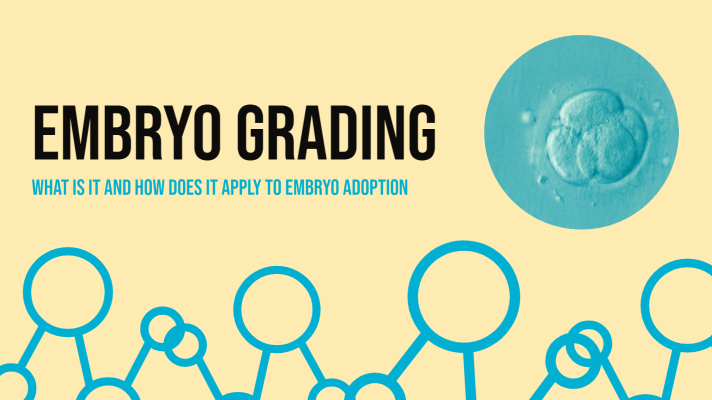 The advances of technology have significantly changed the knowledge we have on embryo development. Although it is incredible to be in the know on the details, many families end up confused by the terminology and process used to select which embryos to implant. One method that is currently used is embryo grading. It is a very nuanced and subjective process, but the scientific community tends to agree on a few basic facts.

According to My Fertility Center, embryos are graded on three main criteria:

This chart from ARC Fertility demonstrates how day 3 embryos are given a number to describe the cell size and degree of fragmentation.

When the embryos reach day 5, they are also given a letter to denote their ‘quality.’ It is important to note that embryo grading is NOT genetic testing, nor does it determine the probability of a healthy pregnancy and delivery. It is simply a tool that is used to take an educated guess on what might happen during implantation.

Following is a description of how day 5 embryos are graded by ORM Fertility:

A = well-defined clump of cells
B = less well defined; may be grainy in appearance
C = a few dark cells, appear degenerative

In essence, ICM’s are the cells that eventually develop into a baby! And TE’s are cells that develop into the placenta and other necessary tissues. Embryos are given a ‘grade’ for each type, and it is denoted with the two letters next to one another. The number grade from day 3 is written in front of the letters. 1AA embryos would be considered ‘perfect,’ but are rare. ORM Fertility clarifies that often, 1AA embryos do not even result in a successful pregnancy. In fact, Utah Fertility Center states that most of the successful pregnancies they have seen were from embryos with grades such as 2BB and 2.5BC.

Although this topic can create confusion and fear in adopting families, the truth is that embryo grading is just one of many tools embryologists use to analyze developing embryos. Embryos that are graded very poorly often result in a perfectly healthy baby! And the opposite is true as well. If you are considering embryo adoption and are worried about adopting ‘poor quality embryos,’ be encouraged by the fact that this rarely affects the outcome.

To learn more about embryo adoption and donation, visit EmbryoAdoption.org