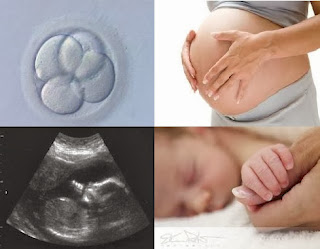 Two microscopic cells, egg and sperm, each smaller than a speck of dust, whose survival is short and their usual destiny is death, but for a unique encounter, in a unique time and place.

Two separate incomplete ones, part of a man and part of a woman, unite and literally become one new being.  A new conception, a new person.

Though diminutive and insignificant to the ignorant and arrogant eye, this whole wholly unique person, held entirely in a space no more than 1/10th the width of a hair, is proportionately filled with more life than any living form.  Everything is there and full of vitality.

Magnified Inside is a world of supreme technology and bewildering complexity. What we would be witnessing would be an object resembling an immense automated factory, a factory larger than a city and carrying out as many unique functions as all the manufacturing activities of man on earth. However, it would be a factory which would have one capacity unequaled in any of our own most advanced machines, for it is capable of replicating its entire structure within matter of a few hours!

In the first 8 weeks after conception this incredible feat will occur 30 times, as a unique and never to be copied miniature person makes his prodigious journey through inner space.  In just 8 weeks he will increase in length over 200 times and in weight more than a billion times, forming an exquisite tiny replica of an adult human being , who measures 1 ¼ inches long and weighs just 1/30th of an ounce.  At 8 weeks he is fully formed, all systems in place and linked by a communications network conducting impulses at 300 feet per second.

After 8 weeks he is called a fetus as he waits and grows and learns in his hiding place.  He moves with a delightful easy grace in his buoyant world, his comfort determining his position.  He responds to pain and touch and cold.  He drinks his amniotic fluid, more if it is artificially sweetened, less if it is given an unpleasant taste.  He breathes and gets the hiccups and sucks his thumb.  He wakes and sleeps and dreams.  He will shield his eyes from a bright light, and loud rock music will cause him to cover his ears.  His cries can be heard if an air bubble is injected into the womb and surrounds his head.  He clearly senses the mood of his mother and other persons around her.

For many, all of this is one cosmic accident, and man is the supreme accident!  But here at the Embryo Adoption Awareness Center, we see this amazing life and growth of each and every person, from a single microscopic speck in the womb as nothing short of miraculous.

It is why we are committed to the lives of all embryos donated to embryo adoption programs, such as the Snowflakes Embryo Adoption Program, and to those remaining in frozen storage, awaiting the decision regarding their future.

Celebrate the wonder that is life this Christmas!