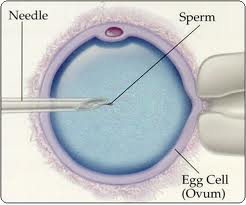 Findings from a study published on-line, on May 10 by the New England Journal of Medicine, initially show that birth defects are more common if fertility treatment included Intracytoplasmic Sperm Injection (ICSI).  In this form of treatment a single sperm is injected into an egg.  The study found that about 10 percent of the babies resulting from this form of fertility treatment had birth defects, verses six percent of those conceived naturally.

ICSI was developed in response to male infertility and the resulting birth defects may be due to the process essentially forcing the sperm to fertilize the egg.  It could be that there is a genetic defect already within the sperm, and ICSI forces fertilization, where none would occur naturally.

While the study showed an increase in birth defects when fresh embryos created with ICSI were used, there was a lower increase in birth defects when the embryos were frozen and later transferred resulting in a birth.  Embryos with potential defects may be less likely to survive the freezing and thawing process resulting in healthier embryos being transferred.