Infertile because of Cancer, Pregnant because of Embryo Adoption Part 1 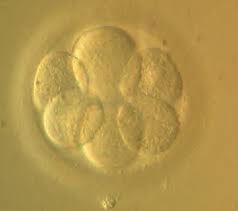 The following is part 1 of a two part series focusing on a family who achieved pregnancy through embryo adoption after struggling with infertility. It is written by Tracy Steiner and is edited by the EAAC for the purposes of this blog.

I heard about embryo adoption for the first time, I don’t know how many years ago, on James Dobson’s Focus on the Family broadcast on embryo adoption. I wasn’t married at the time, but I had childhood cancer and had undergone radiation on my abdominal area. Some of my doctors said to not worry about it, but another doctor said it could be an issue. I remember when I was about nine years old, a woman from church came over to our house because she was concerned about my fertility. She had similar experience with radiation and was infertile as a result. So while I knew it was a possibility that I would have problems getting pregnant, it wasn’t something I focused on.

After my husband and I got married in 2006, we didn’t waste any time trying to conceive, as we were both in our 30s. But we knew right away we were going to have problems getting pregnant. We discovered our chances of getting pregnant were very low—only about a 1% chance. We were referred to some of the best doctors in the country, we were told that I could not get pregnant genetically, but they thought I could carry a baby. I started thinking about Snowflakes (The Snowflakes Embryo Adoption Program) again, but it took my husband a while to warm up to the idea. He was more open to the idea of finding an egg donor. For women, I think it’s sometimes a little easier to think about raising a child who isn’t genetically related.

Women are natural nurturers, and we just want a child to love…it makes it easier, I think, for us to consider raising a child that isn’t genetically ours. For men, I think the desire to reproduce and have children that are a part of them genetically is stronger. It took us several years to get on the same page. I kept praying about Snowflakes and felt peace about it. I felt like embryo adoption was such a great gift, not only for us, but for the family who was donating the embryos, as we would give those embryos a chance at life. We went through further surgeries and we tried a few “experimental” things to see if we could get pregnant, but nothing worked. In the spring of 2009 we were driving in the middle of Texas, and my husband was fiddling with the radio…and there was Megan Fabian on a local AM station talking about Snowflakes. Shortly thereafter, he told me that he felt like confirmation this was the path for us. We both felt that these embryos were all lives, waiting for a chance and that they are each deserving of that chance.

Don’t miss the conclusion of the Steiner’s amazing story next Friday.
(Please read our comment policy before commenting)