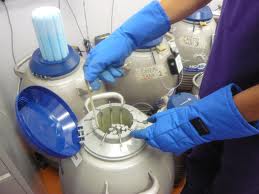 The following is part 2 in a 2 part series on the history of Embryo Adoption. See part 1 in previous EAAC blogs.

Assisted Reproductive Technology (ART) is first recorded for us by the use of sperm donations which started over 100 years ago in 1884 in Philadelphia by physicians who used their own sperm.  It was almost a century later before there was a new major change on the horizon when Louise Brown was conceived through In vitro Fertilization (IVF) and born in July of 1978. Shortly after, in 1983, human donor eggs were used for the first time. News of the birth of both Louise Brown and the use of donor eggs to conceive an embryo outside of the womb changed almost everything for those who were infertile.

Today, those who find they are infertile most often walk a path which takes them through the medical community and ART. Sometimes their stories end in success through the miracle of IVF, but often these parents are left with extra cryopreserved embryos, pre-born children who have not gone through the implantation and gestation period inside a womb. These embryos are left in a frozen state of suspended animation. There are 600,000 frozen human embryos in storage in the world today.

Adoption has been a logical solution to the issue of infertility throughout recorded history and embryo adoption is the natural outcome of the advances in medical technology. In 1997 Nightlight Christian Adoptions began the Snowflakes® Embryo Adoption program.  The first embryo adopted child, Hannah - Snowflake Baby #1, was born in 1998. There are currently eight entities offering embryo adoption programs in the United States.

Embryo adoption is the natural historical progression of both adoption and the advances in ART.  It allows some who would never have a child of their own to experience the excitement, trials and joys of both pregnancy and parenthood.